The Myst Zone is one of the many areas accessible within Lunar Shadow. However, it is not a part of the Lunar Soul Castle itself. Shiori Shauntal is the ruler of this area. It is said that the Myst Zone is actually a part of Anegio.

The Myst Zone is an optional area in Lunar Shadow. There are five sections in all, each area looking different.

This section is mostly blue in color. There is a maze puzzle where the player has to go through certain doors in order to reach the exit; after reaching the final exit the first time, a shortcut is unlocked in the first room of doors. It is entered from Reservoir SP, and leads to Myst: Blood Garden.

This section is, as the name suggests, mostly red in color, including an ominous red sky and red water. Near the beginning, there is a room where Serenity can change her outfits. There are a lot of robots here that can be spoken to, but also a lot of enemies. There are two challenges - namely, a small room which disables both the Air Tank and the Valkyrie Wings (although there is a shortcut that bypasses that room) and a password challenge, where the correct password must be entered in order to continue. Exiting through the door leads to Myst: Demise of Nexash.

This section is mainly green, with sand. It is said to have been where a beast called Nexash was, which was slain by someone named Aran. Nexash was forgotten, by all save for Shiori. There are a lot of spikes in this area, and flight is also required. At the top is the exit to Myst: Desire of Demise.

Another blue area, but with magma and monsters. Right at the beginning is a Life Capsule, which can be grabbed easily. The area also has blue water, unlike Blood Garden's red water; fortunately the player keeps the Air Tank this time. A Warp Door to Tower SP can be found here, and the exit to Myst: Demise of the Maiden can be found nearby.

Myst: Demise of the Maiden

The final area, which is a red area with blue grass. The last part where Shiori Shauntal awaits is red and black in colour, similar to Grie'dyr's Lightning area.. At the bottom is an exit to Entrance I. There is also a Warp Door to Top Floor SP. Former Tirahnysan president, Ilina can also be found here, in a device of some sort; whether she is dead or alive depends on the player's actions before entering the Myst Zone. 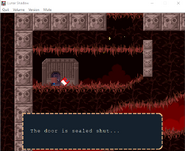 After defeating Shori, there is a bug that causes an invisible wall.

To overcome this, Serenity has to use the Valkyrie wings to fly over the invisible wall.

Getting over the wall will take some effort though.

If you try running against the wall, Serenity may get stuck.

Community content is available under CC-BY-SA unless otherwise noted.
Advertisement