Grié'dýr (IPA: /xrɪˈeɪtiːr/) is the central location of Selenic Shadow.

Almost all areas within has a different theme, each representing one of the twenty-five elements found in Serenth. However, most rooms in Grié'dýr have grey bricks, with some sections containing Japanese characters.

Some areas are protected by powerful monsters. In addition, Grié'dýr itself is a mystery, as most things appear to defy the law of physics.

It is implied that Grié'dýr is the remnants of a civilization of magic and technology, ruined by the three Shadows; however, whatever the "Shadows" are is still unknown at this point.

To gain access to the next room, you must play 5 specific songs in order: 8 (Decisive Battle with Hector),17, 21 (Fear Factor), (Outer Wall) 38 and 48 (Battle on the Big Bridge). The first terminal actually resets the songs, which is useful if you get it wrong. 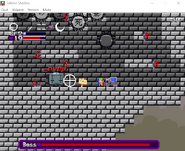 It's easy to rack up damage against it, though it'll take ages to destroy.

And their names seem familiar. 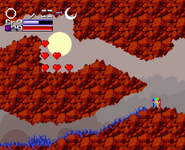 Invidia and Nemesis's taunt, referencing a bug which crashes the game.

A note from Ariana, stating why the Invidia and Nemesis fight was skipped.

A reference to the Hopey Tree.

Selena's reaction to Evan O Neil's knowledge of everything about her.

Referring to a sparkle that reduces your Weapon Grade to 1.

A reference to Grialdyn, one of the most popular bosses in Lunar Shadow.

Add a photo to this gallery

Retrieved from "https://lsproject.fandom.com/wiki/Gri%C3%A9%27d%C3%BDr?oldid=818"
Community content is available under CC-BY-SA unless otherwise noted.